Manor Wood Primary school children know they are lucky, having such fabulous grounds all to themselves.

This year, they are making even more of them than before, and have enlisted my help.

My name is Hannah Butler. For the rest of the week I run Bluebird Gardening, but on Thursdays you will find me working with the children of Manor Wood Primary in all sorts of learning experiences outside the classroom.

What a huge year we had for Learning Outside the Classroom!

Manor Wood Primary has such enormous grounds, we are able to carry out lots of outdoor projects and conduct lessons outdoors every week.

Every child has experienced their learning outside, and this is an ethos which is here to stay.

Feast your eyes on the gallery of our fun outdoor learning....

Year Three - we planted seeds, explored the garden and learned about rocks

Year Four - we braved the winter weather to look after our wildlife and participated in the RSPB Big Birdwatch. We made bird feeders, nesting boxes and a bug hotel

Year Five - we grew potatoes and lots of other vegetables from seed and planted them in our allotments. We used the 'lasagne planting' technique then had to outwit the squirrels and magpies who dug everything up

Year 6 'Dug for Victory' as part of learning about World War 2 and turned part of our grounds into allotments. We grew potatoes and carrots and had a huge feast for all the school to enjoy at the end of term. thank you Year 6!

This summer, Simon Watts and Hannah Butler took on the transformation of the school grounds

Extensive contouring and new play equipment has provided the children with new challenges, and a landscape which leads to imaginative, physical play.

100 tonnes of topsoil, 9 tonnes of bark chip, a lot of turf, concrete and hard graft later...

Special thanks go to:

Gregg and Will from Gregg's Gardens

volunteers from YOS, Lloyds Bank and Redeemer Church in Headingley

and last but not least, the Watts and Butler/Roberts families who rolled up their sleeves and helped, and didn't complain that we were never at home

You made it so much easier - Thank you!!

we may even try making one of these...

Plucky volunteers met at Rodley Nature Reserve on Saturday 8th November and cut down a large area of willow saplings. 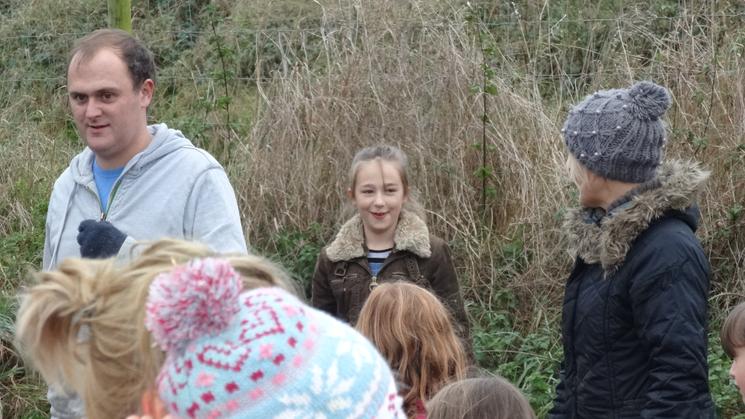 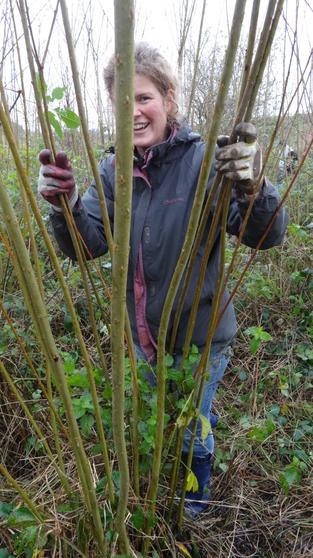 Everyone worked hard, cutting down the willow using loppers, and bundling it up.

Occasionally we had a break for re-fueling...
Then came the rain, but we kept smiling and got the job done

Next we had to get the willow to school. Luckily Paul Done didn't mind us giving his Hilux a punk hairdo!

We started the next day by marking out the shape and digging the turf. 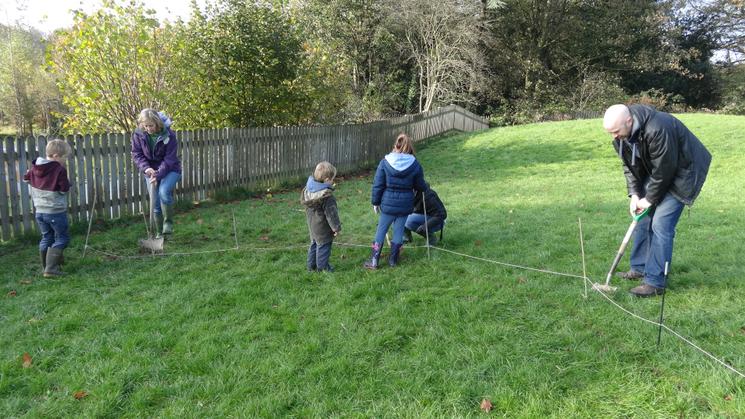 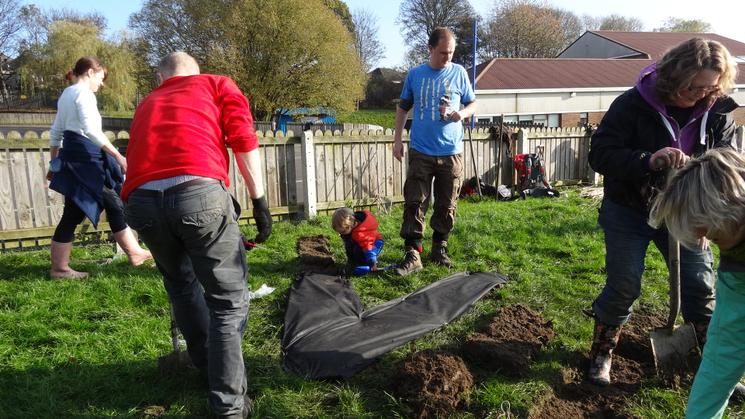 Then the strenuous bit- making the holes to plant the willow in
A great big thanks to Diana, Chloe, Lucy and Lisa for keeping us supplied with hot drinks. 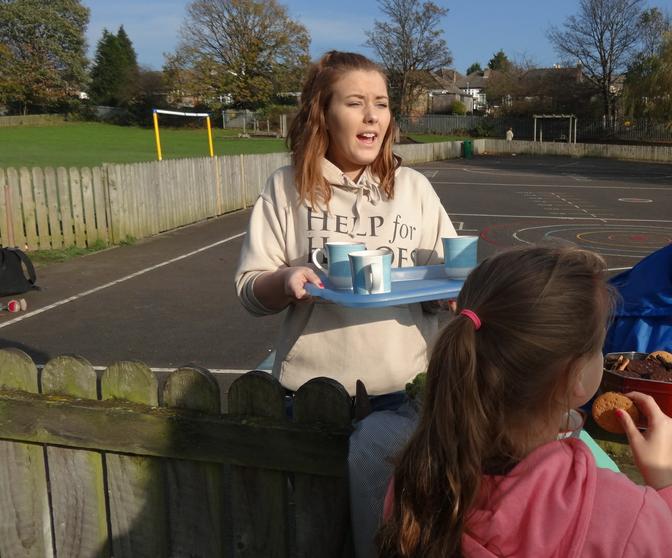 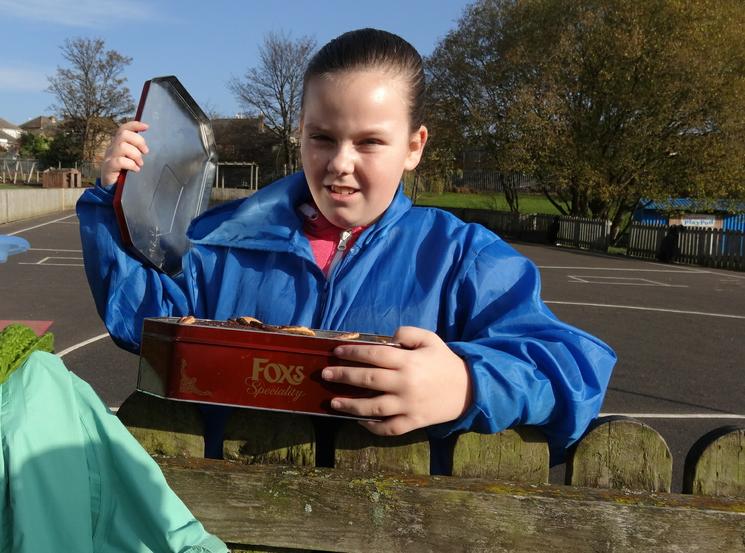 Not bad for a weekend's work eh?

Looking back over the projects we launched last year, many thanks for commitment, hard work and determination are needed

all the families who came to Rodley and braved the pouring rain to cut down the willow.

everyone who came to school and worked their socks off planting and weaving the willow.

Diana Lyons and family for keeping us all in hot drinks

and Mr Bell for opening school at the weekend.

Clearing overgrown areas of the school grounds many thanks go to:

Lloyds volunteers for clearing lots of undergrowth and discovering a bench!

Karen Harley for organisation, enthusiasm and lots of digging

all familes who donated bulbs for the project

and Mrs Harley’s Gardening Club for making Barry the scarecrow to try and stop the birds digging them all up again!

Lisa Kenny at Channel 4 for donating the turf

Mark Creswell of Bluebird Gardening for helping with construction

The Bottle Greenhouse thanks go to:

The Brown family for donating the greenhouse frame

all families who have donated empty bottles

the school office staff for putting up with piles of bottles in their workplace!

And Gardening Club members for continuing the wall building

The children of Keystage 1 worked with me every week during autumn and winter term to make their grounds more exciting and productive.

We have planted a surprise which should be starting to show now, sown peas and beans, built the turf cubes, woven willow shapes and made winter bird feeders.

The children have been keen to participate in all weathers and are always brimming with new ideas.

The children of Year 4 have worked with me every week this term, taking part in the RSPB Big School Birdwatch. We have created all kinds of different bird feeders to encourage birds to our grounds, and constructed wooden nesting boxes to encourage them to stay!

Thanks to Heather Ward who came into school and told us how best to bird watch, and to Ms Defenzi and Mr C Davies for helping with these sessions in the bitter cold.

Photos of Year 4's work will appear in their Year Group section on this website very soon.

All of these projects could not have been attempted without the vision and positivity of Deborah Kenny and her team,

Paul Halpin and his team who clean up after us every week,

Patience and good humour from the office staff,

and the enthusiasm of the teaching teams.

We already have Gardening Club (check out our page on this website) where the children have grown fruit, vegetables and flowers every year.

This year, however, they want to broaden the crops they produce to include tender crops such as tomatoes, cucumbers and even chilis. For this they need a greenhouse...

The children are now collecting 2 litre fizzy drink bottles to make the glass! They have collected 350 already, but need another 700 to complete the task!!

This is what their bottle mountain looks like so far and we are proud that these bottles won’t end up in a landfill site or washed up on a beach...

...but will be helping to grow food for them to eat.

On Tuesday 4th November, some volunteers from Lloyds Bank 'Day to Make a Difference' initiative, spear-headed by Carr Manor Mum, Mandeep Bhamra, came and helped us to finish constructing the first side of the greenhouse. We were amazed at what they got done, as it is a fiddly job.

Thank you to Mandeep, Elizabeth Henderson, and Tarun too! 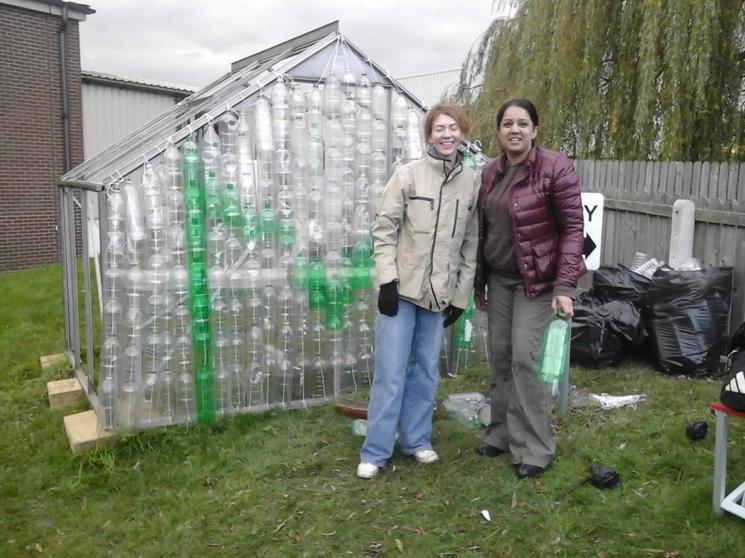 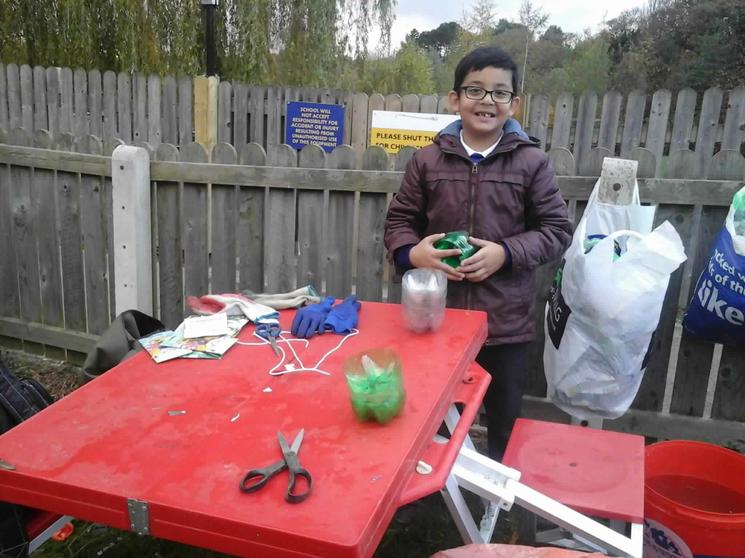 Can you see a green letter?
We progressed really well building the green house, with the help of Gardening Club, and Mark from Bluebird Gardening, and even got as far as a roof...

..but every time we had strong winds, it kept blowing down, which was very disheartening

We decided to move the greenhouse to near our allotments, where it is more sheltered, and to build our own structure for the bottles, made out of wood.

we will re-build it!

The new mega bottle greenhouse designed and constructed by Mark Creswell from Bluebird Gardening AWESOME!! All we have to do now is load it with bottles!

Other Lloyds volunteers travelled from as far away as Scotland and Liverpool to help out for the day!

David Marshall and Ian Addy began the mammoth task of clearing ivy and brambles at the top of the banking.

They discovered a bench which previously was almost completely engulfed.

Thank you so much guys - you really made a difference!

David and Ian enjoyed a well-earned sit down on the bench they uncovered.
The Lloyds volunteers came back on 2nd June and what a difference they made

A brambly overgrown area of our grounds at the top of the banking was cleared; a very prickly, thorny job...

The volunteers created 'dead hedges' using willow and stakes to create an enclosed wildlife area where we are hoping hedgehogs will take residence.

We now have an area under some Rowan trees which is begging for hammocks! Thanks guys!

The day ended in our soon-to-be 'sensory garden'. The volunteers helped work on the stream bed, and created a willow tunnel - what an incredibly productive day. We are so grateful to Mandeep Bhamra and her team of volunteers: Elizabeth, David, Tyler, Mick, Lee and Andy - you guys are amazing!

..and for attaching the fab new mirrors in the sensory garden. 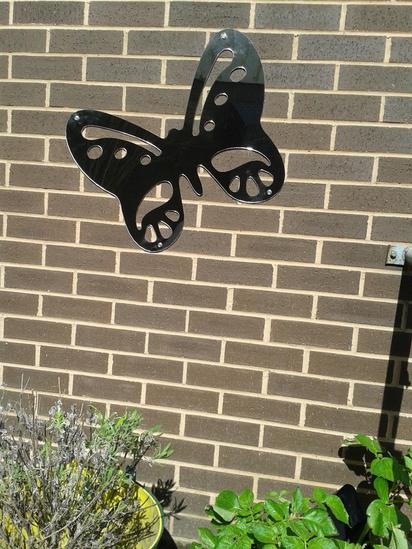 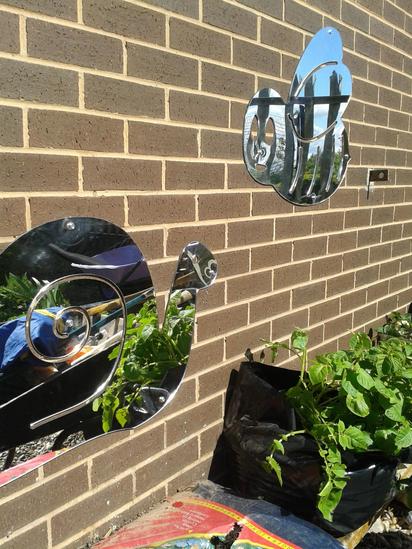 The children wanted to do some more willow building themselves, so some children from Keystage Two wrapped up warm and have built a new tunnel.

They worked hard; selecting the willow, making deep holes in the ground with an iron bar and a sledgehammer, weaving the willow, then tying lots of knots with very cold fingers!

The children wanted to see some colour in their grounds. They started donating spring bulbs this term and collected enough for every child in school to plant at least one.

On October 23rd the whole school was involved in a bulb-planting extravaganza which lasted the whole day!

Early Years and Foundation planted narcissi and muscari, in the shape of a heart, in their outdoor area

Year One planted snowdrops, crocii and narcissi under the trees on the ‘banking’ near their classroom.

Years Two through to Six planted a giant spiral of a wide range of spring bulbs, from daffodils through to tulips, in the grass.

The children had to be very organised and work quickly in order to get over a thousand bulbs planted that day, and they certainly rose to the challenge.

They were enthusiastic and focussed and got the job done. We were so lucky it didn't rain.

We couldn't have done it without Mrs Harley, but we were quite tired by the end of it...

After a long wait, here they come!

Key Stage One have also planted a Spring bulb surprise where everyone will see it.

We hope you enjoyed it

If you have any ideas or questions about our projects, or are keen to get involved, please don’t hesitate to contact me via the school office or hannah@bluebirdgardening.co.uk

Unfortunately not the ones with chocolate chips.

Some cookies are necessary in order to make this website function correctly. These are set by default and whilst you can block or delete them by changing your browser settings, some functionality such as being able to log in to the website will not work if you do this. The necessary cookies set on this website are as follows:

Cookies that are not necessary to make the website work, but which enable additional functionality, can also be set. By default these cookies are disabled, but you can choose to enable them below: